Want to find out about the history of Fiji? Read up here on this set of islands in the South Pacific and it's colourful past, which continues to the present. This Fiji history page is the second part discussing from 1874 to the present.

The Fiji history contents are as follows:

The year 1874 starts 96 years of British rule. The governor Sir Arthur Gordon establishes the "Fiji for Fijians" policy. Instead of direct rule, he grants autonomy over local affairs to the chiefs, although they were forbidden to engage in tribal warfare. The colony was divided into four regions, each under the control of a Roko, then divided into 12 districts under the control of a traditional chief. The Great Council of Chiefs was then established in 1876 to inform the governor. 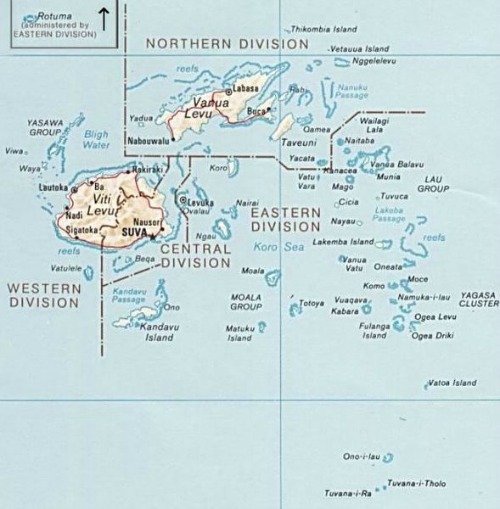 In 1882, the capital was moved from Levuka to today's Suva.

In keeping with the policy, Gordon prohibited further sales of land. This continues to this day with 83% of the land still natively owned. He also prohibited Fijians as labourers to avoid exploitation and to keep the chiefs happy. This led to the first arrivals of indentured labourers.

With Fijians not allowed to work the sugar cane fields there was a big problem. Sugar is labour intensive and needed a large workforce of cheap labour to rake in profits for the British empire. Gordon then struck up a deal with the British colonial government in India in 1878 to import indentured labourers, with the first 463 Indians arriving on 14 May 1879. When the indentured labour system was forced to close down in 1916 due to anti-slavery demonstrations in London, over 61,000 had arrived. Thus most of the Fiji Indian presence in Fiji today are descendents from the indentured system.

This is covered in our World War Fiji Involvement section. 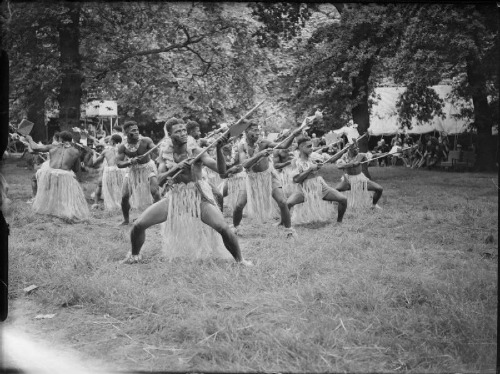 Fiji contingent to victory parade at Kensington Gardens, England in 1946

After WWII, Fiji was taking it's first steps towards self-government. The trick was to incorporate both the native Fijians and the Indo-Fijians into a workable modern political structure.

The British made it clear that Fiji was to be self-governed with eventual independence. Indo-Fijians welcomed this which involved full elections. However, indigenous Fijians were dead against it, in fear that a majority Indo-Fijian government would probably mean loss of control over native owned land and resources.

A compromise was met, and Fiji became independent on 10 October, 1970.

From it's independence, Fiji enjoyed an economic boom up until 1987 when it stagnated likely due to the 2 coups that year.

Up until even now, the divisions between indigenous Fijians and Indo-Fijians have caused political instability. This has been a large factor in the four coups with the third and fourth being in 2000 and 2006. Since the coups, there has been a 'brain drain' with people emigrating to other countries. Between 1987-2001 over 75,000 left, around 10% of the population, with 90% being Indo-Fijian. A 2010 brureau of statistics number puts the brain drain at 20% of the total population.

Return from Fiji History page to History of Fiji page

Return to the hub All About Fiji information page