Home › All About Fiji › ANZ Fiji

Want to know about ANZ Fiji? Find out about one of the leading banks in Fiji from it's beginnings in 1880 to now being the only branch at Nadi International Airport.

ANZ as it's more commonly known, is Australia and New Zealand Banking Group Limited. It's a big multinational banking and financial services company which has operations in over 30 countries. It was founded in 1835 and has it's headquarters in Melbourne, Australia. As of September 2012, the bank had a total of 1,337 branches worldwide.

The bank is a leading bank in Australia, New Zealand, and in several Pacific nations where it competes with fellow Australia bank Westpac. This is no different in Fiji.

ANZ headquarters (right) on the Yarra River in Melbourne, Australia

The Australia and New Zealand Banking Group Fiji has it's roots all the way back in 1880. The then named Union Bank of Australia, opened a bank in the old capital of Fiji, Levuka. It closed in 1895 then re-open in Suva in 1851. In 2002, the ANZ Pacific operations hub is moved to Suva. 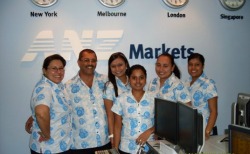 Today, it is one of Fiji's leading banks having a 40% market share. Country-wide it has 16 branches and 75 ATMs including at Nadi and Nausori Airports. As of September 2012, Vishnu Moran is CEO Fiji and CEO Pacific Region.

The Australian and New Zealand Bank Fiji offers the following products in Fiji and all through the Pacific:

The bank has branches and ATM's all through Viti Levu and at Labasa and Savusavu on Vanua Levu. For more information, visit their locator: http://www.locate.anz.com/anz/international