There's Hindi in Fiji?! There sure is! Find out here about this unique language of the Fijian islands and how it's origins is half way across the world.

Fiji Hindi is one of the three official languages of Fiji and it's also known as Fijian Hindi or Fijian Hindustani. It's spoken by most Fijian citizens of Indian descent, although a small number speak other languages at home.

Visit the Languages of Fiji page for an overview of the major languages in Fiji.

Between 1878 and 1916, the British brought in indentured labourers from various parts of India. Just ceded to the United Kingdom, the colonial government wanted to keep on good terms with it's subjects, so they forbade indigenous Fijians to work on the plantations to avoid exploitation. 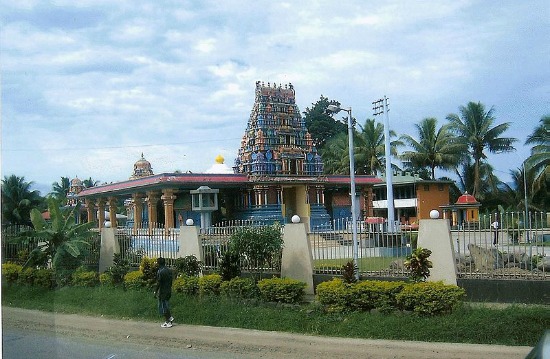 An Indo-Fijian Temple in Nadi Fiji

However, such plantation crops as sugar cane, cotton, and copra were highly profitable for the British, but it needed a huge supply of cheap labour. The British who were also active in India, drew up contracts between their respective colonial governments for indentured labourers to come to Fiji. By 1916 when recruitment was forced to stop from pressure from anti-slavery groups in Britian, 60,537 indentured labourers were in Fiji.

With such a mix of dialects within the indentured labourers, and having to work and live closely together dialy, over time a distinct Indo-Fijian language had formed in Fiji.

Add to that, the mix of 3 languages in Fiji's unique environment, means that it has incorporated a large number of Fijian and English words, unique to the language.

Countries where significant numbers of Indo-Fijians have immigrated to

Following the beginning of political upheavals with the first military coup in 1987, large numbers of Indo-Fijians have since migrated overseas. This can be seen on the map with significant Indo-Fijian expatriates in Australia, New Zealand, Canada, and the U.S.A.. Smaller numbers also exist in Britian and other Pacific Island nations.

Return from Fiji Hindi page to Languages of Fiji homepage