Want to know about the Fiji native or indigenous Fijians? Explore the history here leading back to their inter-tribal cannibalistic days.

For the complete overview of people in Fiji, start at our Fiji People page. 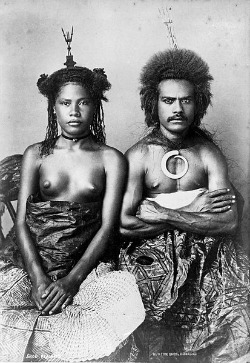 The earliest records go back to around 1,500-1,200 BC when the Austronesian people first came.  Where they came from
is unclear, although the current theories indicate South-East Asia or South China/Taiwan.

Then around 500 BC Melanesians started settling in and the population starting to increase. This led to intertribal feuding. Tribes started to move away from a coastal fishing lifestyle, towards agrilculture with villages moving to a ring moat-fortified
setup when at war.

Archaeological evidence suggests that cannibalism occurred between around 500 BC to the late 19th century. If you lost in an intertribal battle, you got eaten. That was the ritual. Cannibalising the enemy was considered the ultimate revenge and a lasting insult to the enemy's family.

Bodies were either consumed on the battle field or brought back to the village's spirit bure and offered to the local war god. The bodies were then hacked, cooked, and eaten in a celebratory feast. This was accompanied by music and ritual dances both by the men and the women. 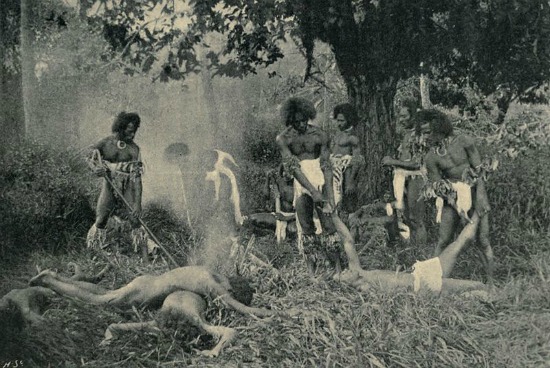 A meat rich diet - A cannibalistic feast in 1869

Better off dead than captured

Skip this paragraph if you're squeamish. If you're captured then torture was probably administered. This ranged from being sexually humiliated in a ritual dance by the women, being thrown in ovens alive, being bled, being dismembered, being forced to watch their own body parts being eaten, or even being forced to eat yourself. 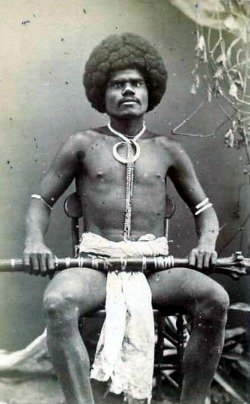 It would seem almost everything of the consumed body would be used. It also acted as further vengeance towards the enemy. Skulls were made into kava drinking bowls (tanoa), teeth used in war clubs, the chief kept a row of stones as a tally of how many victims he consumed, amongst many others.

This title belongs to Ratu Udreudre. He has reportedly eaten at least 872 victims and probably more than 999 and kept a stone
for each. The stones were placed next to
his tomb which can be visited near Rakiraki
in northern Viti Levu. According to his son,
he consumed every piece of his victim,
sharing none, and had a massive appetite.
He's in the Guinness book of records as
'The most prolific cannibal'.

[A Fijian warrior from the Viti Levu highlands (Kai Colo)]

Around 1000 AD, the Tongan incursions began and lasted until the Europeans arrived. It's thought they brought Polynesian culture and languages, still evident today in Fiji.

European settlers starting arriving around 1820 and set up Levuka as the first modern town in Fiji. In 1874, King Cakobau ceded Fiji to the Commonwealth in order to rid debts he had mismanagedly accrued. The British set up plantations including cotton, sugar cane, and copra, and imported indentured labourers from India to work the fields. To ensure the co-operation of the chiefs, the colonial government protected Fijian land rights, and passed a law that forbade land sales to foreigners. This still exists today.